Who is beyond the law? Who is free to choose? 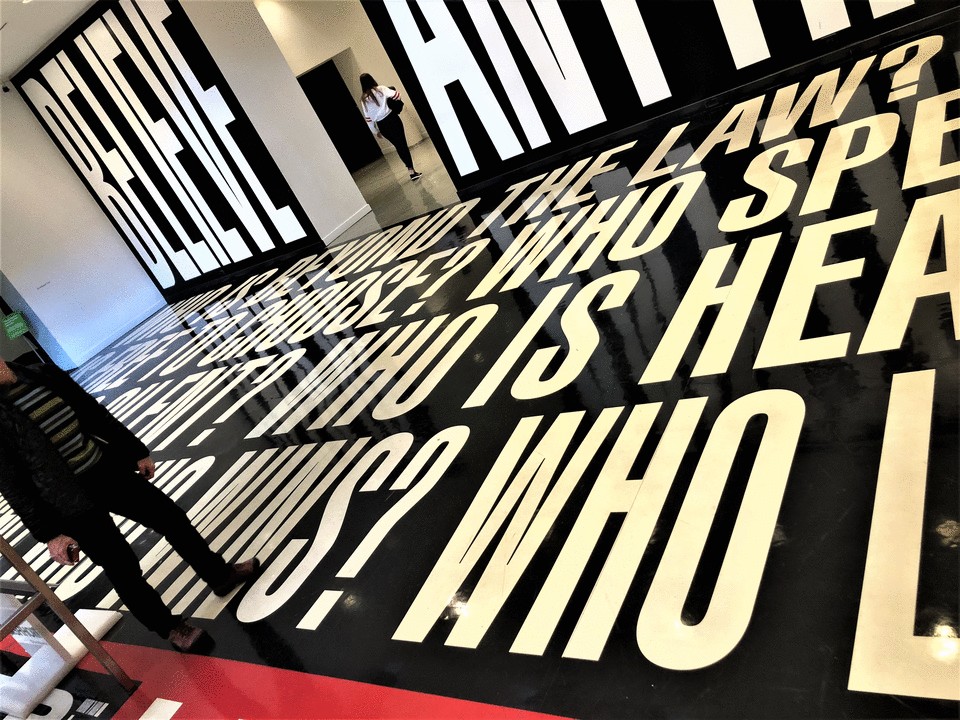 Because semiotics is at least as much about language as it is about visual images, I’m surrounded by active, functioning semiotic signs all day, all the time. After 20 years of paying attention to them, unusual signs or unusual uses of signs stand out to me as soon as I encounter them. They are often amusing and they always reveal something about the culture that produced them, which is, after all, the point of semiotic analysis.

Here’s an example of a semiotic sign – a suit, in fact, the suit – and its unusual use or deployment. I ran across it today.

The context: a short story or anecdote of uncertain origin was posted online. It purports to be true but its extreme implausibility led it to be circulated and reproduced in communities of sceptics such as r/niceguys and r/ThatHappened, both subgroups of Reddit. Here are the first two sentences of the story, verbatim, including the mistakes of spelling, word order and grammar that appear in what seems to be the original version. The only change made below is to censor expletives which might be unsuitable for LinkedIn.

F*****g incredible night. So I was getting on bus the and in front this really hot girl was with her p***k boyfriend who was shouting at her in a suit, I stepped in and said ‘excuse me you realy shouldn’t speak to a beautiful girl like that who do you think you are’, they went quiet and he said he needed to “I need to cool down” and walked off.

Those are the opening sentences. In the remainder of this quite short story, the following events ensue. With the boyfriend conveniently out of the way, the ‘really hot girl’ turns to the narrator who has defended her honour and makes romantic overtures to him, which are enthusiastically welcomed. The boyfriend soon returns to assume his rightful place at the side of his woman and quickly resumes shouting at her. Then the narrator discovers that the really hot girl has planted her driving licence in his pocket “so I could fine her again”.

There are lots of details that make this story implausible. Sharp-eyed and sceptical readers questioned the physical geography of the story by asking where the boyfriend walked off to, as all the action takes place inside a bus. Did he ‘walk off’ to the bus’s upper deck? There are also descriptions of actions and next steps that just don’t line up very well with how people usually behave. The really hot girl immediately begins to kiss the narrator, a turn of events that seems unlikely outside of a mediaeval fantasy about knights in armour and damsels in distress, and then she gives away her driving licence to a complete stranger. One also, perhaps, wonders why she and her besuited boyfriend are on the bus in the first place when it seems that at least one of them has a car.

While all of this detail is certainly striking, the part of the story that caught my attention the most was this phrase:

shouting at her in a suit

A semiotic perspective encourages the view that there is no redundancy in people’s linguistic accounts or visual representations. If this detail “in a suit” is included, it is there for a reason. It is not incidental. But what is the reason? What is its purpose? Answering this question is the task of semiotics. Why is it not sufficient to say that the boyfriend was shouting at the girl? What does “in a suit” add, rhetorically?

Consider the connotations of the semiotic sign ‘suit’. It is the international uniform of the businessman. What are the connotations of ‘businessman’ compared to other types of man? Let’s think of some alternative categories of men – artist; priest; student. Relative to these other categories, by conventional agreement, the businessman has some advantages, like wealth. Perhaps wealth is something that might initially appeal to a “really hot girl”. Relative to other categories, the businessman might also have some less desirable characteristics, though. Perhaps he is determined, which translates into being hard-headed or insensitive. Perhaps this is why, when I came to look for a stock image of a man shouting in a suit, I found an abundant supply of images tagged “angry boss”.

Now let’s ask what the inclusion of this perhaps incongruous detail is doing for the narrator of this tale. It is not there just to make the shouting more plausible – there could be any number of other and more plausible reasons for a man to shout. There’s nothing about being in business or wearing a suit that makes shouting compulsory. We may, then, speculate that the suit-wearing, shouting man is a contrast case who has been set up to cast the narrator in a more flattering light. That is, the story invites us to realise, without the narrator having to spell it out, that he is a different type of man. He may be less wealthy but he is also chivalrous and gentle and would never “speak to a beautiful girl like that”. Perhaps the beautiful girl has realised her mistake. She was initially taken in by superficial displays of charm like the wealthy businessman’s suit but soon realises her error when she is shouted at and switches her affections to the gallant hero.

We could say more about this story. We could explore the trope of the knight and the damsel in more detail or we could ask whether the gallant and chivalrous narrator would have stepped in to defend a girl who was not “really hot”. I also can’t help noticing the way the narrator stops defending the maiden’s honour as soon as she has rewarded him by expressing an interest in him. For whatever reason, he’s not motivated to step in a second time when the boyfriend starts shouting again. It’s almost as though he just wanted a reward and was not actually interested in protecting innocent maidens from harm. But these are matters for another time. For now, let’s just observe that this semiotic sign – the suit – serves this valuable rhetorical purpose of dividing up all men into two simple and binary categories: the gallant knight and the ungallant brute, where suit-wearing, usually a semiotic sign for refinement or civilisation, is presented as a hallmark of the latter. 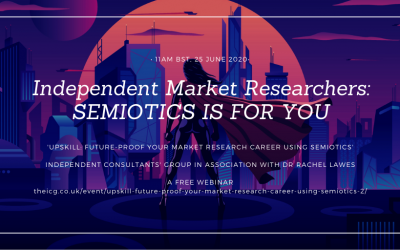 Dear Independent Market Researchers Marketing is changing. Market research is changing with it: this was true even before the pandemic. Clients think they can do their own research in-house. They are by-passing the traditional interviewer. They are no longer impressed... 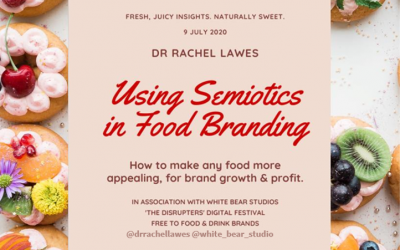 Like everything else that consumers encounter, food & food brands are made of semiotic signs. You can learn to use them to make any food seem more appealing. Find out how with me, Rachel Lawes, 9 July, The Disruptors, a White Bear Studios event. Sign up using this...

Logo Designers: become more powerful than ever before.

in association with DR RACHEL LAWES Do you design logos? This exclusive podcast interview is for YOU. Listeners said: "incredible"; "a goldmine"; "I'm definitely buying the book". WARNING: podcast contains weed, video games, the adult entertainment industry and the... 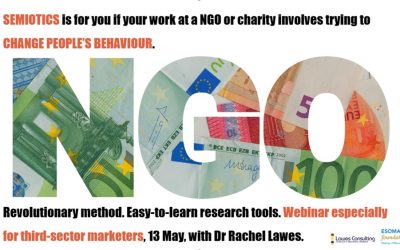 Free semiotics for NGO, Charity and Non-profit marketers. Hosted by ESOMAR Foundation. 13 May.

If you work in marketing or market research, semiotics will change your career and then it will change your life. My newly-published book, Using Semiotics in Marketing: How to achieve consumer insight for brand growth and profits, offers a complete handbook and guide... 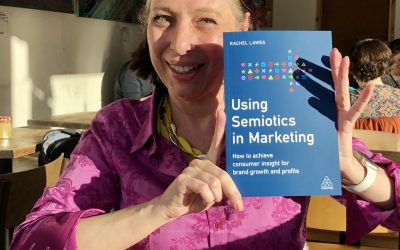 Unboxing my first book, “Using Semiotics in Marketing: How to achieve consumer insight for brand growth and profits.”

Unboxing your first book is like seeing a new baby for the first time.

© 2019 Lawes Consulting. All rights reserved.
Website By the Scruff